Create an Account - Increase your productivity, customize your experience, and engage in information you care about.

Understanding how our department evolved to where it is today can  only be accomplished by remembering where it came from and appreciating  the efforts of those who came before us.

On  August 7, 1946 men and women met in the auditorium of the King George  Courthouse to organize a fire department. Superintendent of King George  and Stafford County Schools T. Benton Gayle brought some firemen from  Falmouth and Fredericksburg “who explained very thoroughly the  importance of a fire department in a community,” according to the  minutes of that meeting. 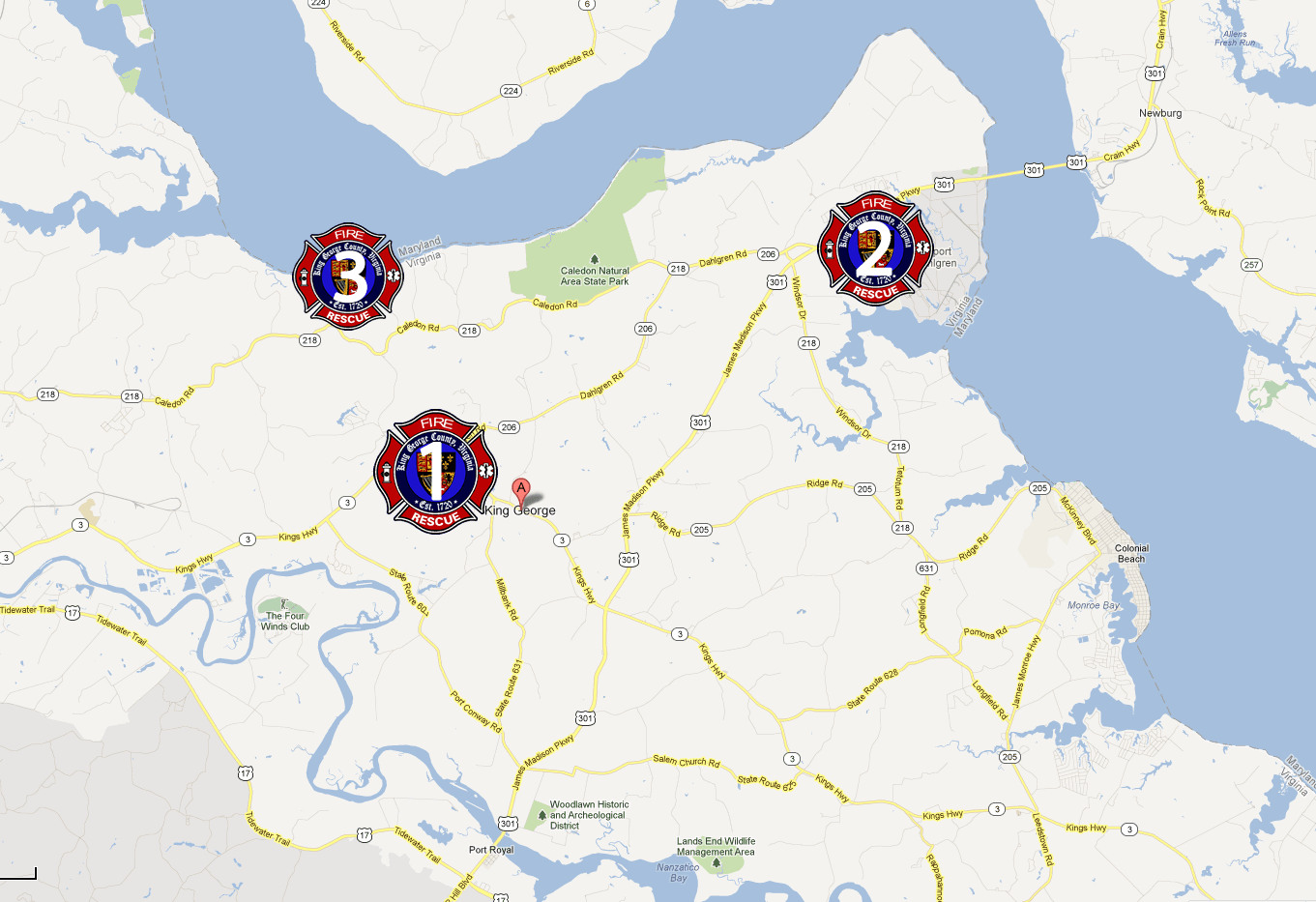 In the early 1960’s eight young men decided, due to the growth in the area, it was time for Dahlgren to get its own fire protection. Up until then, the Dahlgren area had been served either by Company 1 out of King George, or by the federally-funded fire and rescue team on the Navy Base. Company 2 began operating out of a bay at the Texaco gas station. When Company 2 was officially absorbed by KGVFD around 1980 its membership totaled 12.

In 1966 a substation for KGVFD was established in Fairview Beach. The substation was a boat shed that was purchased from Fred Slick and was located on the site next to what is currently the Paisley Dog restaurant. KGVFD had just purchased a new truck so they relocated a 1949 Chevrolet (Number 1) to Fairview Beach. In 1972 the personnel at Fairview Beach requested that they be released from KGVFD and allowed to start their own department named Fairview Beach Volunteer Fire Department. Mack Frye was the first Fire Chief of this organization and Calvin Garner the first Fire Captain. This department provided fire service until the merging of FBVFD and KGVFD in 2000 which then became known as King George Fire and Rescue Incorporated.

In the early 1970’s KGVFD hired a career firefighter to supplement volunteer coverage during daytime hours. This single firefighter was responsible for getting the appropriate fire apparatus to the incident and taking care of day-to­day tasks. This remained a single firefighter position until 1999.

In 1999 King George County created the Department of Emergency Services under County Administrator Tom Harris, and brought the four Paramedics and one Firefighter employed by the two volunteer organizations into this department. These five individuals were intended to supplement the volunteer rescue squad and fire department during daytime hours as both Firefighters and EMS providers. As the needs of the County continued to increase the department grew and in 2003 career personnel began supplementing the volunteer organizations on a 24-hour daily basis.

In 2005 Dahlgren Rescue Squad and King George Fire and Rescue merged. This merger was a hard action to accept for many volunteers because of the personal feelings that go along with being a volunteer and having to become part of something new.

In September of 2008, the King George County Board of Supervisors passed an ordinance establishing the King George Department of Fire Rescue and Emergency Services. This department unites the career and volunteer organizations into one operational entity with one clearly defined mission, line of authority and chain of command. The County Fire/Rescue Chief at the time this ordinance was enacted was David W Moody. Just as there was difficulty accepting the merger between DRS and KGFR, this transition was not without its own challenges.

The contributions of the brave men and women who established these organizations will never be diminished by the progression of time. The selfless dedication and personal sacrifice of those who came before us should be a template for every member of this organization to follow. Change can be very difficult to embrace, but if we follow the example of our predecessors and continue to serve the public and not ourselves, we will form a stronger organization that each of us can take pride in.